After 268 days I finally have another triathlon race report! The last one was the Montreal Esprit...I had a breakthrough race at the Olympic distance with a sub-hour ride and 2:03 time. I decided to end last season with that - a little earlier than expected - because I knew that was my best race of the year and that's how I wanted to end the season.

I was looking forward to starting this season where I left off last year with a healthy winter of training, numerous PB's in the pool and CP tests on the bike, then a two week training camp with lots of quality miles. But then my first race (a USAT Elite series event) was postponed six weeks before the race date...and while the race staff were all too happy to promote the presence of a Canadian pro at the event, they conveniently ignored me when I explained the new race date wouldn't work for me and I was out a few hundred bucks in travel expenses.

Then I was going to head down to Trinidad&Tobago at the end of May for a small event with a ridiculous amount of prize money. But two weeks before the race they quietly announced that the prize purse had been cut to less than half of what it was. All of this left a pretty bitter taste in my mouth with the amount of work I had put in to get my season going, then have two of my key events for the year scratched at the last minute.

When the opportunity came up to head to Connecticut for Rev3 Quassy I jumped at the chance and finally committed to my first tri of the year...to the Olympic race, while the feature event with the half ironman the next day. So no prize money and not quite the stellar pro field of the half, but a very competitive race on a hard course, and a world class event (yes, Rev3 puts WTC to shame).

I hit the road with LPC teammate Thierry, a strong age group athlete racing the half the day after my race. I stole some of his photos (hope you don't mind!) to document our journey. This was my side of the hotel room... 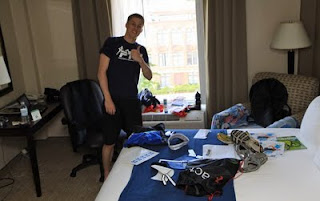 I had no idea what to expect from this race. I knew the courses were extremely hilly, and while bike/run training has been going well I had been a little inconsistent in the pool and I really didn't want to start the season off with another disappointing swim split. But my race was overshadowed by the awesomeness of the professional transition with my own spot beside many of the biggest names in the sport. 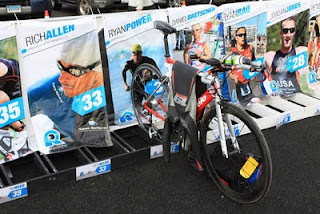 There were only a few pros in the Olympic race but it was still pretty cool to get the special attention for a day. Unfortunately that also meant there was no pro wave, and unlike in my Multisport Canada races they didn't group the pros in the first wave. So I went off with my age group in the second wave. We went off 3 minutes behind the first age group wave, but as you can see some of us bridged the gap within 100m. Not to complain...I know fast age groupers have to deal with this at every race. I'm just commiserating that it's a pain in the ass to swim through hundreds of people doing whip kick and double-arm backstroke, or quite literally trying to grab on to a faster swimmer as they go by. 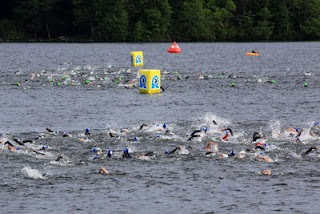 I was weaving through swimmers the entire 1500, trying to maintain something that resembled a swim stroke. But when I made the last turn I saw that there were only a few swimmers in my wave who were ahead of me (or at least a lot less than I'm used to), and even less of those who had started 3 minutes ahead, I had a feeling that I was going pretty well. When I hit the beach I was feeling more fresh than I ever have exiting a swim and posted an open water PB at 22:04. 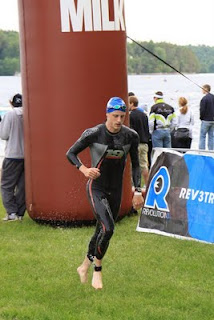 And that's where the fast splits ended for me. I was ready to throw it down on the bike knowing I'm riding well right now. But it turned out to be one of those days where nothing was going to work. Prior to the race my Powertap computer crapped out on me, so Thierry being the engineer frantically got his Garmin 500 on my bike and had me ready to go. But despite our best efforts I couldn't get any power readings during the race...not a huge deal but I had been planning to stick to power targets on the crazy hilly course. Not to mention I dropped my chain twice.

I wasn't about to blame a bad ride on my equipment...my legs simply did not want to work, and that course kicked my ass. There were no flats on the course at all - you were either going 12km/h up a hill, or 70-80km/h down. No in between. My bike training has been focused on pure time trialling (for a flat 90k) and I really struggled to get into a rhythm on this course. I was glad to get off my bike after quite possibly the longest 41km I've ever done. 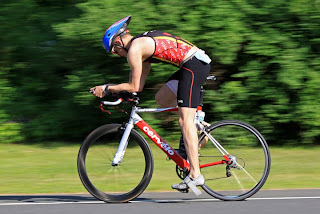 The first two miles of the run were entirely downhill, and while I passed everyone who had gone by me on the bike I knew the worst was yet to come. 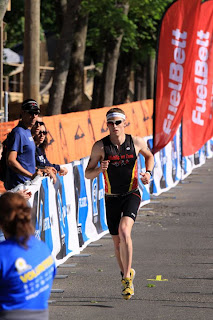 Theirry got some awesome shots of me doing my best Paula Findlay "show no emotion while running" impression. And don't start criticizing this heel strike...I was running a downhill 5-min mile. 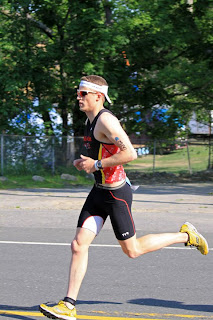 The first major climb back up was at 5k and was about a mile long between 5-10% grade. My 5k split was under 16 minutes but that meant nothing considering how much climbing I had back to the finish. After that climb I was still on 6 minute-mile pace which I felt was a decent goal for the first race of the year. After that there were a few downhills so steep that I had to slow down to almost a walk just so my legs wouldn't buckle. Then the final climb was another mile again up to about 10% grade and by there it was clear that running sub-40 on this course was a feat. Here's another awesome shot Thierry got of me where my stride were about a foot long trying to survive the last uphill...apparently he was yelling at me but I was pretty out of it at this point. 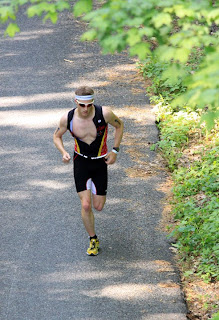 I stopped the clock with a ridiculous 2:19 time and 40 minute 10k. If someone had told me that I would start my 2011 season off with a 2:19 I probably would have retired. But I'll take that on this course. Having lost some time on the bike to the leaders I didn't place as well as I'm used to but I'm happy with my swim and run, and I'm confident I'll get the bike figured out for my next race. 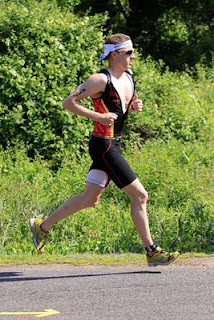 The Olympic distance is finally starting to feel normal, and while I pushed it hard I still managed to feel pretty good throughout. I can tell my fitness is there and I'm happy to start my year off with one of my most consistent races.

The next day I was lucky enough to catch all the action of one of the most competitive long course fields you'll see this year. It would have been fun to be a part of such a big event but I'll take things one step at a time. This was by the best run event I've done and I'm looking forward to building the back half of my season around one of Rev3's feature events.

I'll try to post some photos from the pro race soon. But I also have to mention that Thierry had one of the best races of his life, with an awesome 4:44 on the crazy course and a top-10 in the super competitive 35-39 age group. Great racing all around, back to training.
Posted by Ryan Power at 6:27 PM