My journey to 70.3 Worlds all started in June of 2013, the last time I was in Mont Tremblant. It had just been announced that 2014 World Champs would be held in Tremblant and up until that point I hadn't considered trying to qualify for World Champs...I was still a baby with 70.3 races.

The transition to long course racing for me has been a challenging but extremely rewarding task - coming from a background of elite short course racing I brought valuable and somewhat unique experience to it, but learning how to properly prepare and execute a 70.3 is a completely different story, especially with my previous racing lending towards racing hard at the front from the gun.

That's why I love long course though - the journey from setting the training program to waking up on race morning, then trying to execute and get the most out of that training (avoiding limiters such as poor nutrition or pacing...or FLAT TIRES!) gives me new perspective and makes me a better athlete every time I go through it.

After finishing Mont Tremblant 70.3 last year I had two big take-aways from the race - its an incredible venue and extremely well-run event, and if it wasn't for my mechanical I likely would have finished either first or second in my age group, at one of the most competitive races I had done to that point.

So Coach James and I decided to try to get one of the earliest qualifying spots for 2014 Worlds, at Muskoka last year...you can read that race report here. Fast forward to last week, and the day had come at last. I was back in Tremblant, and the awesome venue was just as I remembered it. 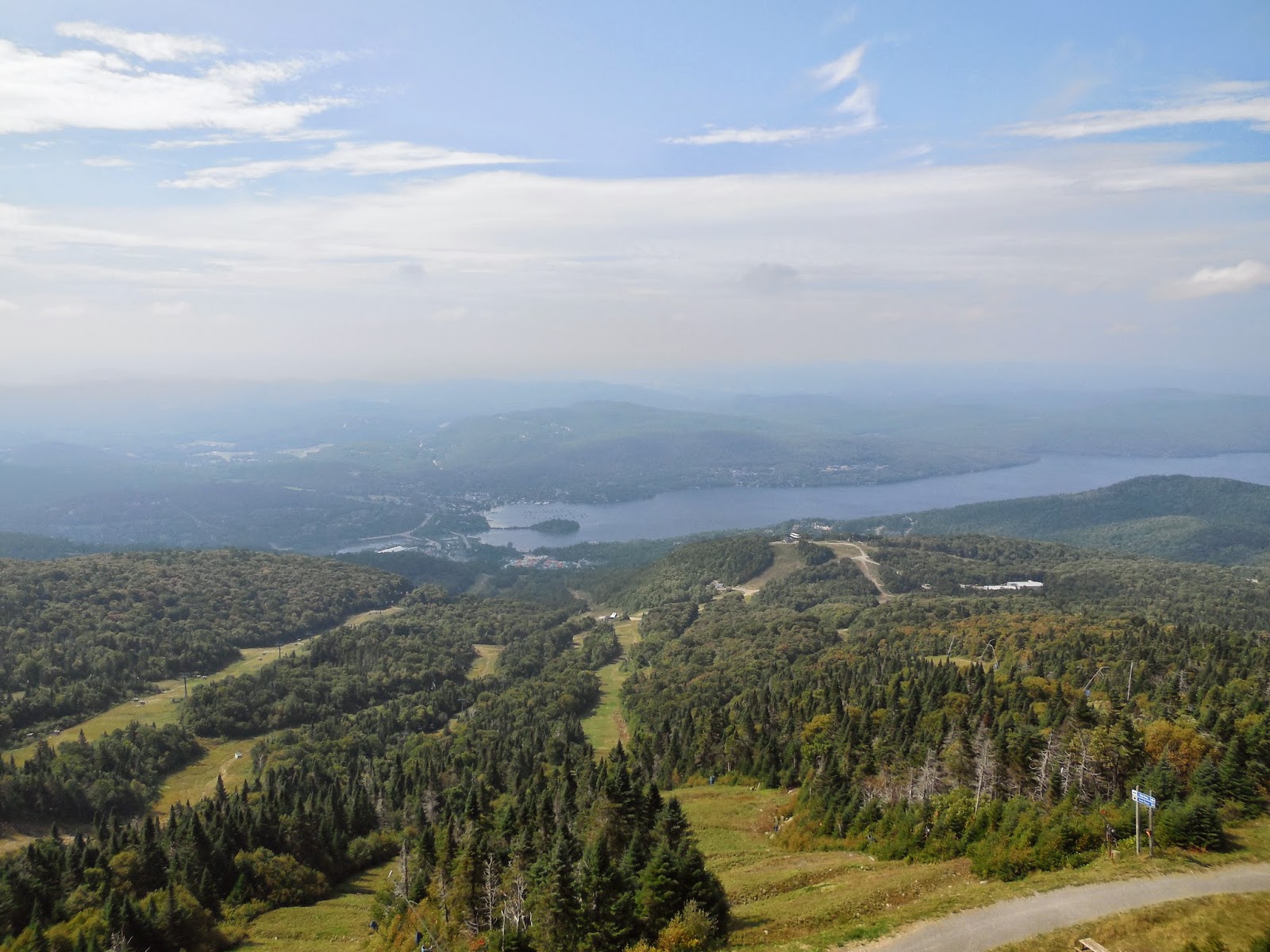 I won't bore anyone with the details of race week. Suffice to say I mostly spent the 3 days leading up to the race standing in various line-ups. The event was top notch, but my cumulative time standing in line was far greater that my race time. Anyway, onto the race report.﻿ 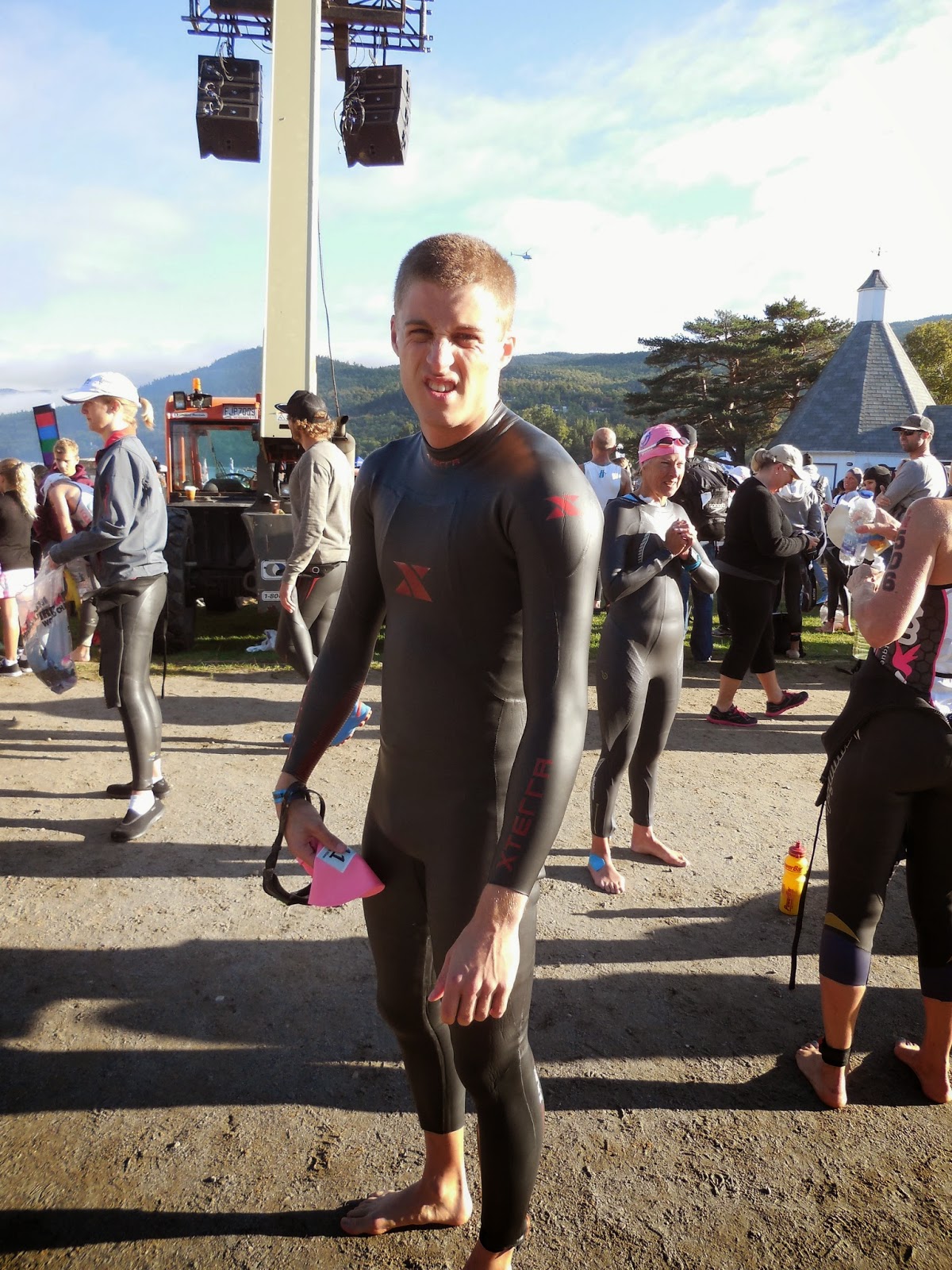 My M25-29 wave was at 8:40, so there was plenty of time to lounge around and try to cram as much food in as possible. The pro start was marked with fireworks and a fighter jet fly-over...that was pretty f***ing cool. Then just 40 more minutes and it was my turn.

(You'll just have to trust me that I'm in there somewhere)

My swim has been a bit of a challenge for me this year. The combination of tweaking my swim stroke, swimming a bit less than in previous years, and occasionally lacking some consistency when it came to hard solo swims, has made it an up-and-down year with my swim. My only goal was to swim comfortably, and hopefully hit a similar time to my splits in Tremblant and Muskoka last year.

The swim was a little crowded but I managed to stay out of too much fighting. With it being World Champs and competition being much higher than a typical 70.3 it didn't spread out too much, but for the most part I had clean-ish water and was able to focus on a smooth stroke and keeping the effort in check. When I got to the swim finish I was happy (and relieved) to see 29:14...I think my official split was 29:19. 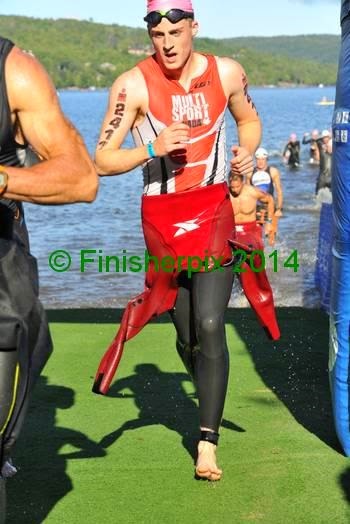 T1 was interesting with it being set up like a full Ironman, with wetsuit strippers, transition bags and change tents. It was all new to me but I managed to get through the organized chaos pretty well and felt good getting on the bike.

I didn't have any specific goals on the bike...somewhere between 2:20-2:30 seemed pretty good. Last year my split was 2:34, but with my mechanical (got a rear wheel replacement and lost my power meter) my actual moving time was closer to 2:25...which was way harder than I should have ridden and I paid for it. My biggest goal was to stay clean despite the (literally) thousands of people drafting in huge packs, and hopefully have a little boost in overall power from Knoxville. 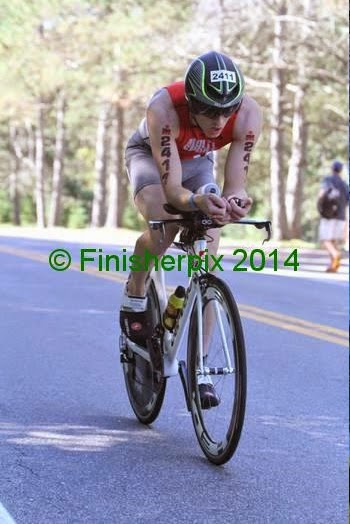 We had a bit of a headwind going out to the first turnaround at 33k and my power was a bit above my target, and average speed only in the 36's. But coming back from there I felt great, I just wanted to get through 30-70k as fast as possible knowing that the hardest section was still to come. Nutrition was good, pacing was good, and I was comfortable in aero throughout. 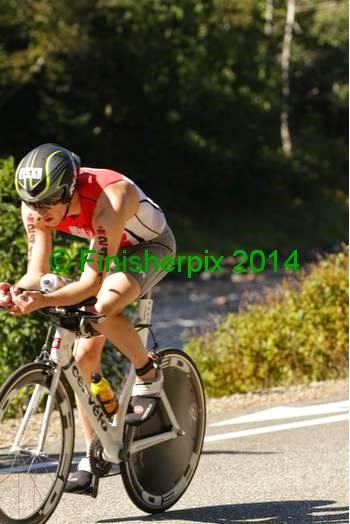 From 70-80k is the toughest part of the course, but having raced it last year and ridden it earlier in the week I knew what to expect. I kept my power in check on the tough climbs and rode well all the way through 90k...it was definitely my best executed 70.3 bike to date.

Coming off the bike I wasn't concerned with my position, knowing that it was a huge and competitive race, and refusing to join a draft pack certainly lost me many positions. I wasn't there to cheat, I was there to race. And I was executing a great CLEAN race.

My biggest goal for this race, as it has been almost all season, was the run. Up to this race, every 70.3 I have done I've knocked a couple minutes off each consecutive run, and on progressively harder courses (Welland, Tremblant, Muskoka, Knoxville, 70.3 WC). This one was no exception, as the run course was changed from the standard 70.3 and had over 300m of climbing, including twice up the 24% grade through the pedestrian village. Many 70.3 BIKE courses don't have that much climbing. But my run training had been going extremely well leading up to the race and I was confident that I was in 1:25 shape on any course...likely 1:20 on a flat course.﻿ 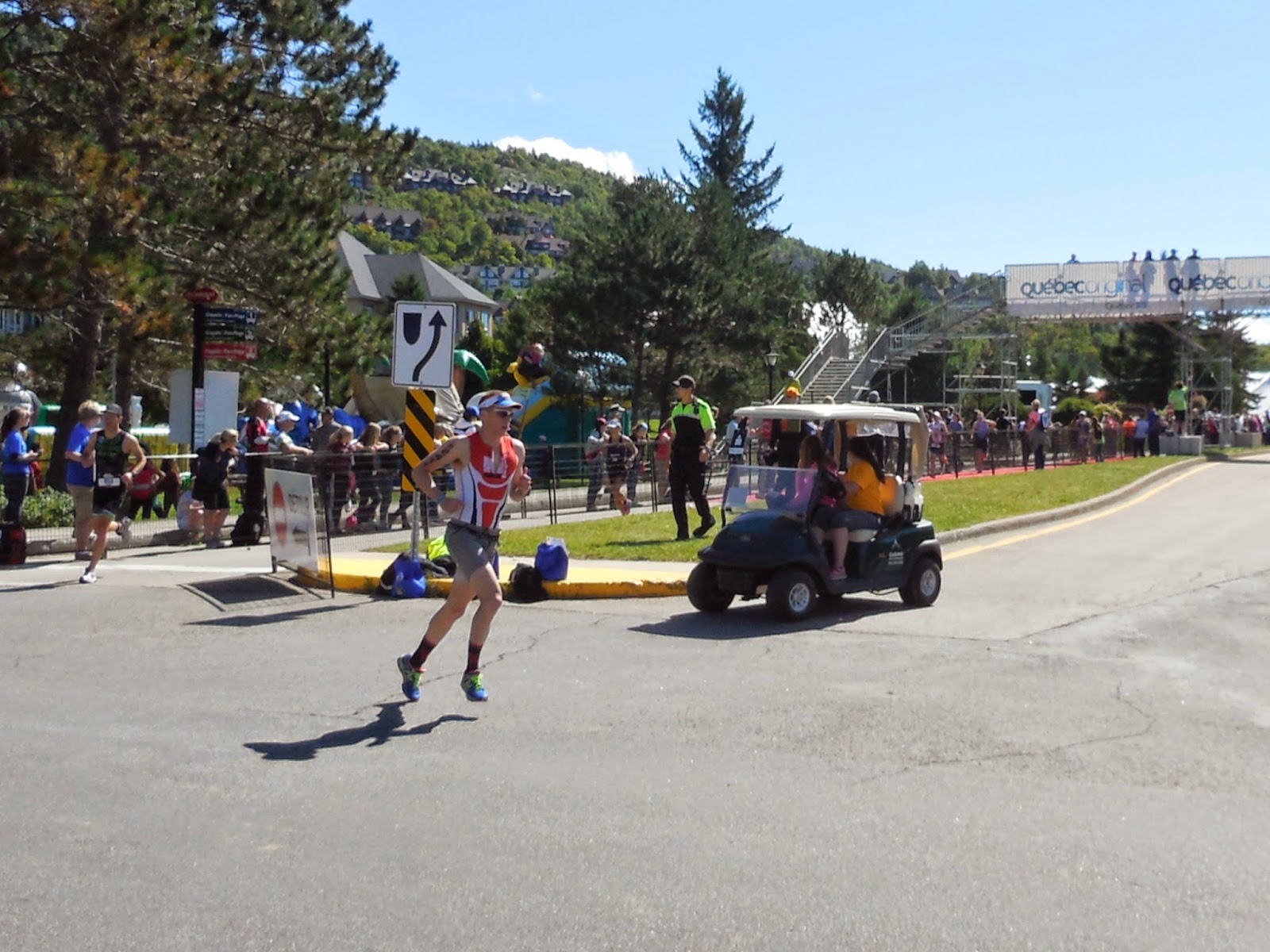 Through T2 with the funny transitions - actually it was great to have a bike catcher and only have to worry about grabbing my bag and getting my shoes on - and off I went at 3:45/km pace. That didn't last long.

Right away I didn't have the same speed in my legs that I did earlier in the year at Rev3 Knoxville where I ran 1:28 on no slouch of a course. I made it through the first few k's at roughly 4:05-4:10/km, which I still would have been really happy with on that course. Whether it was all physical or in some part mental (not feeling 100% on a beast of a course) my pace was dropping at 5k and I was feeling like I would expect to feel at 18k. I kept it together enough to tell myself to just relax on the first lap, and hopefully my legs would come around on lap 2. My first lap split was exactly 45:00...not where I wanted it to be, but it at least gave me a chance to still break 1:30. 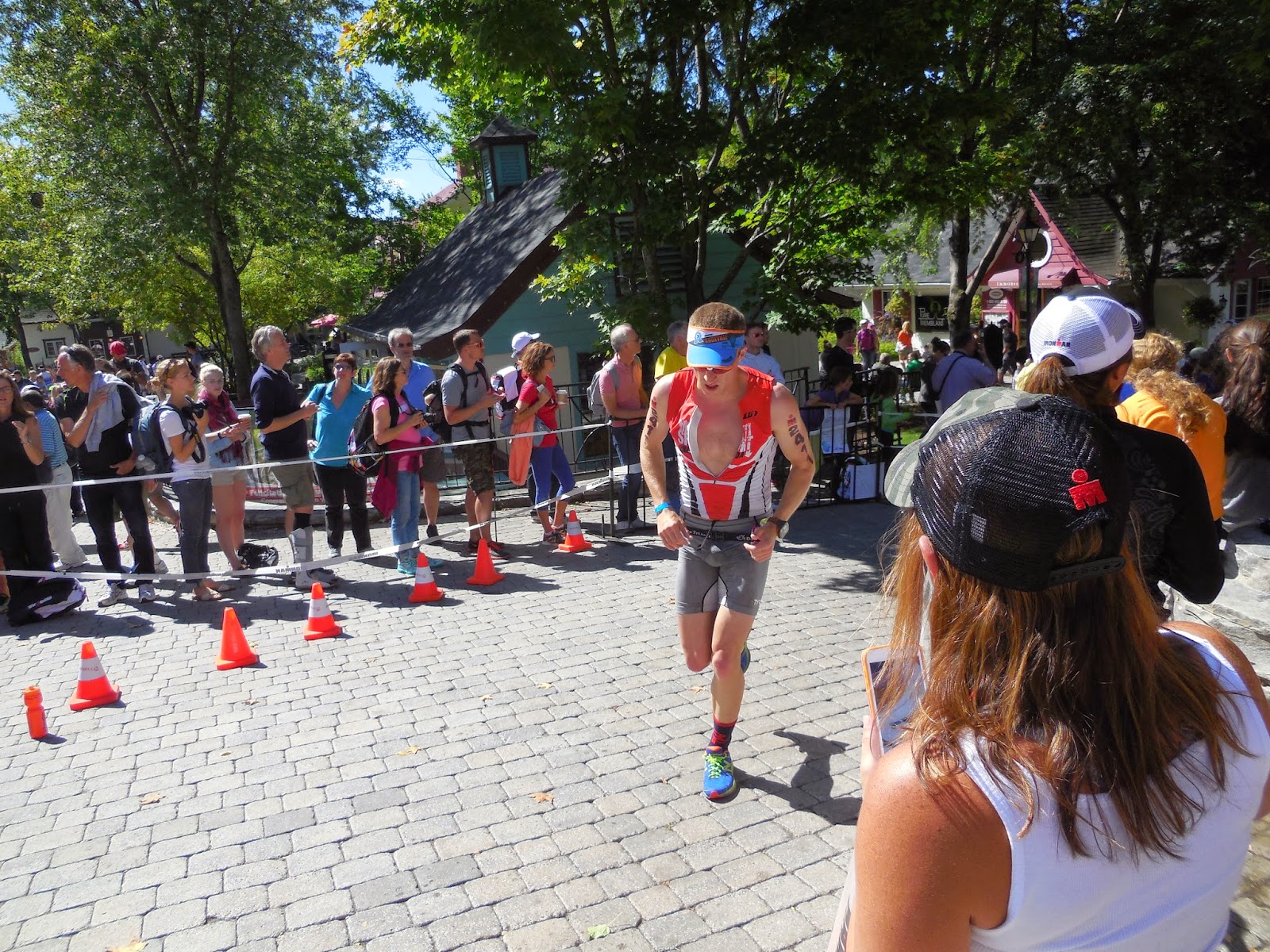 (end of lap 1 up through the village...suffering already)

Knowing what to expect going back out for lap 2 played in my head, and by 12k I was in damage control. I was still running, and did not allow myself to walk a single step...it was just really slow. A few times I started to feel a little better and picked up my feet, only to still see 4:40s on my Garmin, but at that point I didn't care about my time. I just wanted to get the damn thing done.

I ended up with a 1:34 and change run split. Far off my original goal for this race. But more than any other race I've done, I have a ton to take away from this one. It was an amazing experience to be at Worlds, and I definitely took a few risks with my pacing, rather than hold back as long as possible to get to the finish line in one piece. Not every run can be a PB, especially when I'm learning to ride harder as well. So I'm confident that the next one WILL be a faster run, off a faster swim and bike. I seriously can't wait to tackle a pancake flat course like Welland again and see what kind of time I can hit.﻿

I had hoped to continue my tri season from here, and especially after not fully realizing my run fitness I'm motivated to break 1:25. But I've got some BIG goals next season, with a lot to take away from this year...so for now its time to relax a bit, hit a few local running and cycling races, and potentially have a go at a fall half-marathon.

Thanks for following along and reading...its been a fun season!
Posted by Ryan Power at 7:10 PM No comments: