Ok so I’ve taken some flack over the past few months from those who have been waiting for me to update this for more than half a year. And I may get some more for dragging this thing out again. Partially its been because I’ve had little time to put some thoughts together (and when I do its rarely more than 140 characters…hence my twitter feed @lifein53x11), but also because I have matured as an athlete, gained a lot of focus and in turn and have not felt the need to put my voice out there in a while. I’ve just been quietly putting in the work and have enjoyed doing so.
But now that tri season is in full swing I’ve thought about putting some race reports together. I must admit it’s a bit flattering to have people ask me to write something and look forward to hearing my experiences…but I’ll try not to let my head swell too much.
So now to the reason why I started writing again! This past weekend was my first big event of the season, the Mont Tremblant 70.3. The spring and early season leading up to the race had gone very well. I did a few road races as I have the past couple years and jumped into a 10k as well, and while there were no spectacular results, they served their purpose as great tune-ups after missing the better half of last year’s race season with post-concussion symptoms.
But the main highlight of the spring was simply that everything was going to plan. Despite being very busy with work I managed to stay consistent with training through the winter and spring. No crazy weeks (besides LPC Florida Camp), just putting in the time and getting the work done every day.
Leading into Tremblant my prep went very well and I was really looking forward to giving the 70.3 distance another crack after finally finding some modest success (ie. finishing) in Welland last summer. I learned from Welland that I really had to get comfortable in the aero position for 2+ hours, as well as pay more attention to nutrition and pacing on the run.
My final prep was doing the Guelph Lake Sprint Tri two weeks ago. I had not done the race since the summer I lived in Guelph and trained full time with the PTC (now RTC Guelph) so I was a bit nervous that I would not have the same top end speed. But I went into the race with a good mindset, and after starting in the second wave I raced through the field and finished 3rd overall, 4th across the finish line despite the later start. Even more satisfying, I knocked 4 minutes off my last time on the course :) 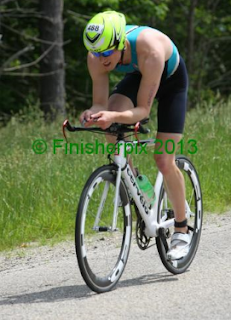 (been working on that aero position - looks pretty ballin' to me)
It was exactly the confidence boost I needed to have a race go smoothly and feel strong throughout. Not to mention the experience of racing through earlier waves of athletes, as I was starting in the LAST of 14 waves (2500 athletes) in Tremblant. Amanda and I made the trip to MT on Friday and settled in with a bunch of athletes from the Balance Point Tri Club, most of whom were racing on various relay teams (Amanda was doing the swim-bike). The area was beautiful, and despite the almost painful level of Ironman and WTC rhetoric and imagery around the village, I have to say it was the best organized and run venue I have ever done.
Race morning came at 4:30am on Sunday, since even though my start time wasn’t until 8:05 we had to finish our transition setup and body marking by 6:20. So rather than spend time standing around in the chaos and adrenaline of the start line I hung out in the hotel lobby of the Westin where Coach James was staying. We met up for a quick pep talk and once again I was in a great mindset heading to the start line – calm but excited to start the journey and begin the suffering!
I eventually made my way down to the start and caught the pro men exiting the water on the way. Then I met back up with Amanda and the BPT crew just before the start. Quick warmup, do my best Gangnam Style rendition, then game time. Having come from some elite racing I carefully chose my starting position (oddly where no one else was) and knew that I would have to take it out hard to find some clear water…at least until I ran into the next wave. I couldn’t help but smile with the excitement of getting such a cool race underway, and have Amanda and friends starting with me in the same wave.
Luckily the countdown was in English and French so once the gun (and fireworks) went off I started strong and was out front quickly. I cut into the inside of the buoys to avoid traffic and quickly settled into my rhythm. After about 200m a couple other fast swimmers in my wave went by but rather than change my pace I kept my effort to where I wanted it to get out of the swim fresh.
I ran into the first person floating on their back from the previous wave after about 300m, but really only had to fight the congestion on the far stretch (of about 500m) of the course, then once around the second turn I went to the outside and settled back into my stroke. There was definitely some chaos with the number of swimmers (and some crazy scissor kickers) but I focused on what I could – getting back to shore fast. At about 1500m I got a bad calf cramp so from there on I just focused on my pull and roll, and as the shore got closer my stroke felt better and better. When I stood up both my legs cramped for a few seconds, but they loosened up quickly once on land. 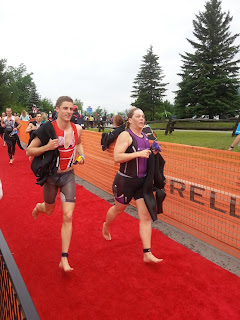 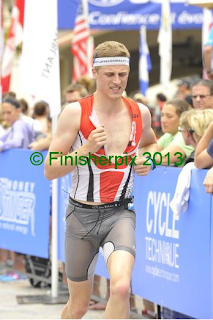 (showing the war face)
The last km had a brutal hill and annoying little 100m out and back before finally turning into the pedestrian village and running through an incredible crowd down to the finish. It was an amazing experience and completely worth the suffering to have so many people cheering, music playing and tons of athletes finishing. I gave out some high 5’s before crossing the line in 4:41. My loose goals for the race were to do 4:30 and run 1:30, but given the circumstances of the day I couldn’t help but be happy with my result. My fitness is much better than last year and I learn more about the distance and myself as an athlete every time I finish a half. Now I want to do MORE!!!
Lots more fun racing to come this summer, but no guarantees of more race reports :)