The feedback on Power Hour continues to be overwhelmingly positive and I may have to invite Char back on the program sometime soon. I think we've hit upon something that most of the triathlon community seems to lack - an ability to stop taking life so seriously and appreciate a self-deprecating sense of humour.

But apparently I've stirred up quite the controversy regarding some times I posted for a recent run workout in Florida. 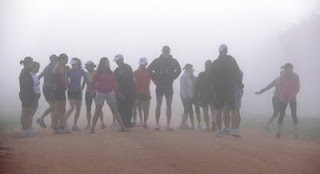 The truth is, I did not go to a training camp last week...I went on vacation to Orlando and tapered for two weeks prior to running the Orange Grove,

We spent 10 days taking temperature, relative humidity and barometric pressure readings before choosing the day to run on,

I have not been swimming or biking through the winter, just banking 100 mile run weeks on the treadmill,

I wore track spikes and a Garmin for 1/4 mile splits,

James spent the whole night prior watering the sand and removing all pebbles larger than 1mm in diameter from the 10 mile course,

My workout stated "mostly moderate effort", but I was at threshold from mile 2 and ran myself blind,

Lionel's 54-mid clocking was motorpaced and he drafted off the space shuttle.


I hope that has cleared up who are the posers and who are the true champions of the universe :)
Posted by Ryan Power at 9:28 PM 1 comment:

Clearly I didn't do so well with posting updates while I was in Florida...I was too busy living the dream. But I'm back to real life now and I can tell you all about it!

Coach James and I drove down a week prior to the LPC Florida camp to get some extended warm weather training in before all the campers arrived. I've been to Clermont for a track camp so I knew the running would be good but I was surprised with how great the riding was on my pretty new Cervelo R3. 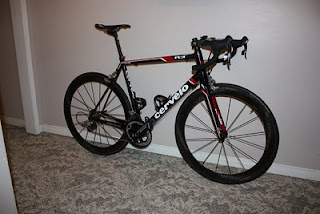 I didn't even have a chance to stand over my 14lb superbike before packing it up (generally not advisable for a training camp or race), but it was instantly the best bike I've ever had BY FAR. I never want to ride anything else. More responsive, more power, no more back pain!

Ok back to the camp. I had a few days of easy training on my own and with James before my bike buddy Charlotte came down and we put in some great swims (10x200, 21x100, 400s...) and long rides in before all the campers arrived last Saturday.

The LPC camp officially started on Sunday with a couple easy workouts while everyone got a feel for things. My goal at the camp was to provide a positive example of how an elite athlete trains and recovers through a big week...it wasn't easy with everyone motivated to have an "epic" week of training. But it was a very positive group and they made it a lot of fun all week.

Wednesday was a big day with brick intervals and an open water swim at Lake Louisa State Park, the same venue as last week's ITU North American Sprint Champs. 3x 11k bike/1 mile run, on tired legs after Tuesday's 100k bike/10k run. Turned out I had a great sparring partner in Lionel Sanders who is a monster on the bike and an even better runner. Watch for his name in the 70.3 circuit in the near future. On the first rep we averaged just under 44km/h on the bike and ran a sub-5 minute mile. I got dropped pretty hard on the last two reps (I don't remember the last time anyone dropped me...many years ago) and only averaged 40 on the bike but I held 5:18 miles. Here's James attempting to conduct an LPC interview a few seconds after my last rep: 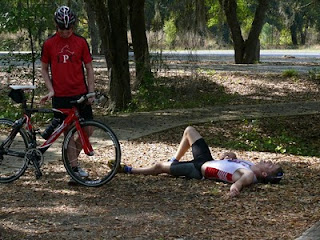 I pushed myself to the brink of death on Wednesday and I was pretty burned out the next day. It was a struggle to get through 3500m of active recovery in the pool so I had to take the afternoon off while everyone else had a long ride out to Sugarloaf. I was pretty disappointed but I was already ten days into a big two weeks of training so I wasn't entirely surprised. But Friday was the last official day of the camp with the Orange Grove 10 mile run so I wanted to finish off strong.

The RTC squad did the Grove run a couple times on their camp a couple weeks back so I knew that it takes a strong run to break an hour over the loose and rolling terrain. But my run wasn't supposed to be any faster than "tempo" so James told me I wasn't allowed to go under 1:10. 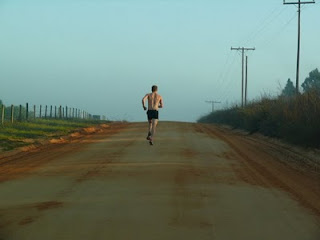 Well I started running and despite having nothing left in my legs I could tell I was running pretty well. So I got in my little zone and at the half way point I was at 30:50. The back half is usually known to be a little slower with more hills and heat but I decided I wanted to see how close I could get to an hour. I finally saw the finish through the fog and stopped my watch at 59:42. But before I had a chance to feel good about my time...Lionel came in with a 54:23. Over a minute faster than the best time posted by the RTC/NTC squad. We're pretty sure that's the fastest time a triathlete has ever posted.

We had a few more easy workouts before hitting the road Saturday afternoon for the long drive back to crappy weather and some more indoor riding. But it was a great camp and I put in over 50 hours of training over 12 days. A few big efforts and some confirmation that I'm much stronger now than I was in peak form last year. And it's only March.
Posted by Ryan Power at 9:09 AM No comments: