I suck at off seasons. It's taken me a while to realize that, and even longer to try to figure out a strategy around it.

Now I certainly know better than to be a November champion...I simply shake my head at triathletes posting their training, or even keeping track of what they are doing this time of year. I understand the periodization of the year, the value of bringing balance back into your life, and that whether you feel like it or not your body needs a bit of down time after a long season.

What I struggle with is shutting my brain off at the end of the season. As with most competitive athletes I tend to end my season with a big year-end goal race. Some years when that race has gone well I've headed into the off-season on a huge high and super motivated to keep racing. Sometimes I've known better and shut down racing, but have been overly keen on crushing the upcoming year.

This year I had a different type of struggle after Louisville. I was so fit; fitter that I've ever been in my life. I almost couldn't believe how well my body responded to long miles. I may have been in 9:30 IM shape, but I was definitely in sub-4:15 70.3 shape and probably even sub-2:00 Olympic shape...and I didn't get to express any of it.

I spent over a year looking forward to that race, I didn't get the result I was looking for, and it was going to be a long time before I could give it another shot. That was a really shitty feeling.

It took three weeks of fighting the urge to register for more races or spontaneously run a casual 40k before I finally found the right mindset for this time of year, and find some good takeaways from this past season.

First off, I've been working with Coach James and Coach Mark to analyze my race day files and nutrition schedule to try to identify some possible causes of the GI distress I experienced in Louisville. I've also reached out to some medical professionals about the symptoms I was experiencing. We've come up with a few potential conclusions:

My pacing, while aggressive for a first Ironman, was well within the ranges that I trained in and I was never once above my high-end target. But I was likely a little too strict on sticking to my nutrition plan when my stomach started to turn on the bike. I thought I needed to force it down to survive later...live and learn I guess. I also likely ate too much on race morning and in the first hour on the bike, which may have backed me up for the rest of the day.

There's also the variable of the questionable water we swam in, which was miraculously cleared of the recreational advisory two days before the race, for exactly 5 miles upstream and 5 miles downstream from the race. To add to that, the only time I've experienced similar symptoms in a race was at Elite Provincials a few years ago when the beach was posted for e.coli levels (and Triathlon Ontario took down the sign for our race, before putting it back up for the remaining races in the day). Maybe coincidence... maybe my stomach is extremely sensitive to bacteria in the water. Coach Mark's suggestion to my idea of eliminating each variable was:

I would try the eating less idea before I tried the drinking Ohio river water idea....

Since the bulk of my racing for the whole year revolved around Louisville it was hard for me to find many positives from my season at first. The training for Louisville was fun but extremely draining. I only raced a handful of events and skipped out on many of my local favourites to accommodate training. I had to withdraw from my first goal race at the Welland Half to avoid injury risk in an IM year. Honestly speaking my only noteworthy results from 2015 were a solid time at Around the Bay 30k, a couple decent local results and cracking 4:20 in Muncie 70.3 with what I considered a sub-par swim and a "just-ok" run.

That's why this can be such a tough sport. If someone were to "Sportstats creep" my season they'd think something was wrong with me. But without question 2015 was my best year in triathlon. When I think about everything I accomplished this year the race results are pretty meaningless. Almost every single weekend throughout the year I accomplished something I didn't think was possible. Whether it was a 26k treadmill run in February, 100 miles of crazy hills in Muskoka, 7-hour bricks in 40+ heat, or heading out for a late afternoon run and finishing with glow sticks in the pitch black.

I wrote this about a year ago, shortly after I signed up for Louisville and posted my reasoning behind wanting to do an Ironman this year. When training started to go really well I developed some extrinsic motivation for Louisville, but this was my true goal for 2015. I'd say I crushed it:

The biggest reason for me wanting to do an Ironman wasn't even for the race itself but for the training - not only experiencing the ups and downs of the big miles but also getting back to basics and nailing down my technical skills in all sports. [...] I firmly believe that focusing a year on base fitness and improving efficiency will not only make me stronger but significantly faster when I go back to racing shorter stuff the following year. Not to mention optimizing nutrition and recovery strategies. Even if the race goes to hell with the unpredictable nature of it being my first IM, I am confident that I'll be racing on a completely different level in 2016 than ever before.

I may not have posted a lengthy resume of results but 2015 was my most consistent year of training and I proved to myself that committing to a goal and following it relentlessly brought me to a level of fitness I didn't know I was capable of. While I was frustrated with many of my swim splits this year, I posted a new 400 PB in the middle of Ironman training. I also swam a sub-56:00 3.8k in the pool, not to mention swimming under 59 minutes in Louisville. All of that was on about 10k per week of swimming.

I also brought my cycling fitness to a whole new level this year. I've always considered myself a decent cyclist, but until recently I was much better at road racing and sprinting than time trialling...let alone getting comfortable pushing out a big effort in the aerobars for 5+ hours at a time. But this year I posted new personal bests in every distance on the bike. Two 20k TT PB's, both were well above any absolute power or W/Kg numbers I've ever put out before. My two 70.3 splits were 2:15 and 2:14. And my Ironman bike split in Louisville was in the top 15 overall despite riding on the conservative side of my power target.

And even though most of my run training this year was focused on building mileage, I surprised myself with going well under 2:00 at Around the Bay and nearly hitting my half-marathon PB at that point in the race. Then I had one of my best sprint tri's at TTF, and ran a second best-ever Olympic-distance run split on rolling gravel roads at Lakeside (15 seconds off my PB literally set on a race track in Montreal). Not to mention I managed to stay healthy and injury free all year despite the big miles.

So after a couple weeks of eating tons of pizza and candy, drinking plenty of beer, and doing way too much thinking...I'm ready for the off season! It's time to take a step back in training, focus on the little things and forget about speed or pace times for a while. And slowly build the foundation for a big season next year. Oh and lots of mountain biking :) 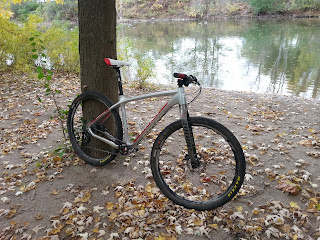 As I mentioned there will be no Ironman next year, though I certainly have some unfinished business with that race. But next year I'm looking forward to getting back to how I started in the sport, lots of fun local stuff, finding new challenges and knocking down some more PB's.
Posted by Ryan Power at 8:21 AM No comments: