Do You Even Triathalon Bro?

My next race after the Subaru Valens Tri was supposed to be the K-Town Long Course Tri...likely my favourite race in Ontario for the uniquely awesome and challenging distance, and as I discovered last year the timing of it works really well to prep for a late season 70.3. Unfortunately after Valens I managed to catch the summer cold from hell...I wasn't deathly ill but just wouldn't go away and it forced me to take close to 10 days off training. Along with that I was struggling with some shoulder issues in the water and needed to get a handle on it before the 2k K-Town swim that can be really rough. So Coach James and I decided that it would be best to pass on Kingston and race Age Group Provincials the following weekend in Bracebridge.

Luckily the way it worked out I managed to get a bit of a mid-season break and a mental recharge along with starting to get my feel back in the water. I got some really good workouts in leading into Bracebridge including the longest brick of my life and some really strong runs. Its crunch time in my prep for 70.3 Worlds so the plan with Bracebridge was to get a solid Olympic distance race in my legs in the middle of a hard training block. And while I didn't exactly get the result I would have wanted, I accomplished that goal.

Last time I did Bracebridge I was a late entry and started in about 300th place in the TT format which made for a challenging race with most of my competitors finishing half an hour ahead of me, but at least I knew what to expect this time. I started in 37th this time so I figured if I had a solid performance the only athletes that would be ahead of me by the end would be the elite guys, of which there was a solid contingent.

My main goal for the swim was to get through it with a controlled effort and without having any shoulder issues. I was pretty disappointed when I saw my time after the race but given that I had missed some time in the water and a few weeks ago I couldn't swim 400m continuous without pain, I'm at least happy that I got through it without any pain...and it looks like all the swim times were on the slow side so I'm confident that its a step in the right direction.

Within the first 10 meters on the bike my bottle of sport drink launched from my BTA cage, and even if I had planned on stopping, it had broken anyway. Luckily I had packed 2 gels but only half a bottle of water as my main source of nutrition/fluid in an Olympic distance race is sport drink. I embraced the new challenge and got on with the task. My plan was to build the effort but when I hit the first short and steep climb 5k in I immediately knew it was going to be a tough ride. My legs were empty from a hard week of training. I tried to find a rhythm and bring up my power through to 20k but by that point I knew that I had to adjust my expectations and focus on climbing efficiently, descending well and staying aero as much as possible. I ended up riding at my goal 70.3 wattage but there was some comfort in knowing that at that power output I'd be on pace for around a 2:25 bike time in Tremblant on a similar course. 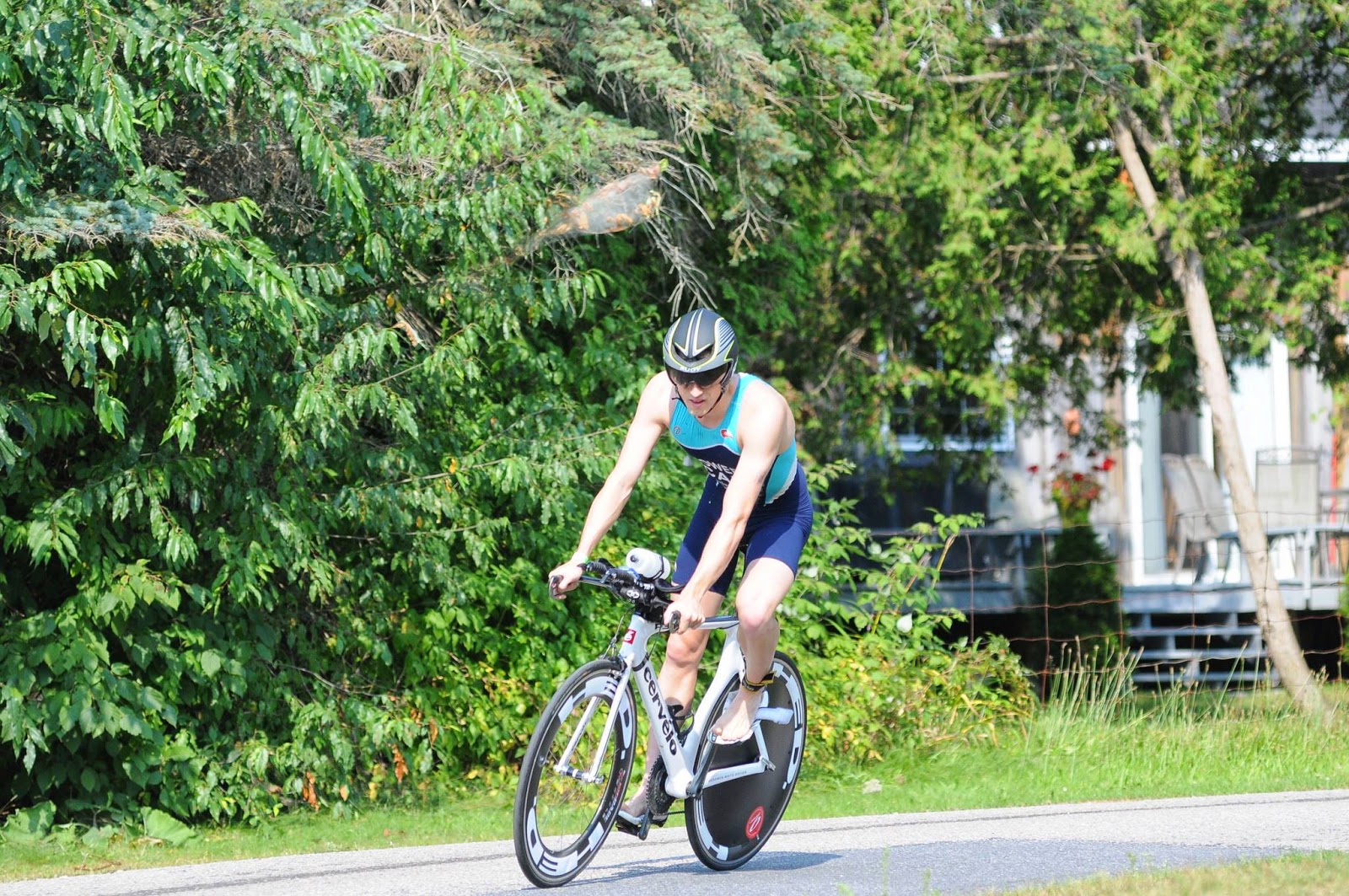 At least my Rudy Project Wing57 kept me looking fast

More than anything else for this race I wanted to put down a strong run. My Olympic distance run PB has held for 4 years despite getting extremely close in my last two Oly-distance races. And based on my recent run workouts I was pretty confident I could run 36-mid off the bike. But when my first km split was 20 seconds behind that pace I had a pretty good idea that it wasn't going to happen. I managed to bring my pace down over the next 3-4k but by the time I hit the turnaround I had nothing left. I was running at my half-iron pace and it felt like the last 5k of a half. At that point I knew that I just had to get the damn thing done regardless of the result...I was flat from a hard training block but it was a great prep for Tremblant, even if I had intended to finish 10 minutes faster.

So that's the way she goes. I had a bit of an existential crisis after checking out my splits, but it will be an important piece of the puzzle leading into my big race of the year. All my signs in training are pointing to me hitting my goals in Tremblant and I can't wait to get there.
Posted by Ryan Power at 8:57 PM 1 comment: