So as I'm sure you're all aware of by now, about two months ago I had the bright idea to plan another half to get my season rolling. Preparation is just about done and the Welland Half is now 6 days away. Whatever happens in the race - because as I've learned, you never know what's gonna go down in long course - I'm really happy with how my training has gone in my prep for it.

Since I couldn't race last weekend I had to find one more tune up before the big one. So I headed down to the Leamington Triathlon with *cough* (pretty yoga buddy) and her coach for Age Group Sprint Provincials. Southwestern Ontario has a ton of small independent races that seem to have a cult-like following, and with it being a AG Worlds Qualifier it was going to attract some fast athletes.

So we crashed at LPC secondary headquarters just outside Windsor and had a short 30min commute to the race site the next morning. It's an interesting course with the swim in a marina with a surprising amount of chop and current and even more seaweed...then a flat but windy ride and a fun two lap 5k run course.

I tried starting on the outside since it was a slightly more direct line to the buoy...and found myself wondering why virtually nobody else was thinking the same way at a championship race. But the swim turned out to be surprisingly challenging with a lot more chop than this photo does justice, and I was fighting the current pushing me further to the outside. 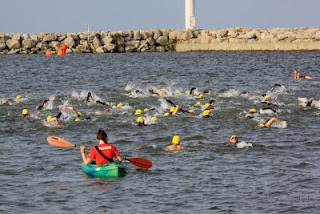 I was in pretty bad position coming around the first turn and was forced to play catch up through the last 500m. I can really feel my increased swim fitness in open water and made up a lot of ground through the last 400 getting stronger as I went. Which made me even more frustrated with my tactical mistake that cost me missing the leaders' feet.

I got out of the water in a little chase pack (with the leader over a minute up on everyone) of some UWO tri club buddies. It made for a bit of chirping in T1. One guy in particular, Alex Vanderlinden has made some incredible strides this year and I've watched him quickly become one of the guys to beat in the local racing scene, and an incredibly fast runner.

So I got on the bike with Alex just ahead of me and some fast riders behind. I really focused on getting my heart rate in check and establishing a strong rhythm quickly, something I really struggled with in my last race and will be critical in my half this weekend. The wind was blowing on the way out and my newest toy (Garmin Edge 500) had my average speed at 34.0 at the turnaround. But the way back was fun with a good tailwind, and thanks to Multisport Zone I had the chance to roll Zipp 808/1080s which helped too :)

I got off the bike with my Rev3 buddy Thierry who is riding like a man possessed these days, with Alex (who was in 2nd place) about 5 seconds up on me out of T2 and the leader Josh Seifarth about 2 minutes up the road. I ended up with the 3rd best bike split behind Josh and Thierry and I headed out of T2 in 3rd. I knew it would be a monster task to make up any places with Josh well up the road and Alex in 16-mid 5k shape off the bike. But I was interested to see what my 5k speed is like with all my training geared towards a consistent half marathon pace.

The two lap run course was great. Lots of support from spectators and athletes, I got to see my position with 3 turn arounds, and I even got to cheer on my road trip pal as she was heading out on her first lap while I was suffering through the final mile. 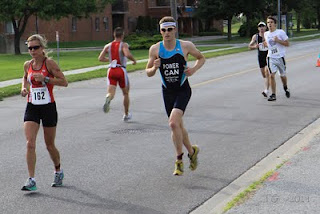 I'm definitely lacking the sustained top-end speed I want for short course racing...I'd like to be 300-320W avg on the bike for such a short race and running 3:2x's on the run. But despite my completely different focus in training I felt fit and had a pretty consistent race (decent position out of the water, 3rd bike split, 2nd run split) for 3rd place behind Josh who was just too far in front, and Alex who had another monster race and top run time on a course that was 400m long.

There was a great LPC contingent at the race, and everyone raced well and fun times were had. My road trip pal had another awesome result for 3rd overall woman again, 1st in her AG and won a spot to Worlds. 3rd place buddies!

I felt like I should have gotten back on the bike for a few hours after such a short race, but as of my race finish I'm officially on my taper. Leamington was the perfect final tune up and gave me a bit more confidence in my fitness. I'm much better prepared for this half than my feeble attempt at STX last year and I'm looking forward to showing some mental toughness out there. After Welland I'm looking forward to getting fast again :)
Posted by Ryan Power at 9:39 AM