Last year this race kicked my ass. You can check out my report here, but I can summarize the painful details by saying that it was one of the worst race experiences I've ever had. The event itself is extremely well organized and it's an epic course but I was mad at myself for pacing so poorly and not respecting the demands of the race.

I'm not quite sure why I was so motivated to give it another crack this year. Maybe I'm a glutton for punishment...maybe I just wanted a chance to have a more positive experience this time. So with a new cross bike, some fast wheels and tires, and the valuable experience I gained last year I was looking forward to improving on my execution and result this time around.

Last year I finished in 2:40 and roughly 320th place which was barely good enough to allow me to start from Wave 1 this year, just behind the Elite/VIP wave. I thought cracking 2:30 would be a good (however arbitrary) goal this time. But I also had it in the back of my mind that if you finish in the top-100 you can enter the elite wave the following year.

Now 100th place doesn't seem like something I would normally strive for. But with a couple thousand riders and a large elite field of domestic pros, national champions, World Cup CX racers and even some pro tour riders, finishing in the top 100 is the "holy grail" as Coach Chris told me during last week's Tuesday night interval ride. He estimated that if conditions were fast I would need to go around 2:13-2:15 to achieve that. I decided that would be a great long term goal after a few more years of cross experience, so my main goal this time was just to have fun and feel like I gave it my best effort.

Similar to last year, despite another late spring the course was in excellent shape. Apparently too excellent, as I heard that they actually dumped a ton of water on a couple of the mud chutes to make things more interesting?! I lined up about 20 minutes early in Wave 1 and was already near the back of the corral. It didn't bother me too much though as it would lend to my strategy of starting a little more conservatively this time and leapfrogging the groups as I gradually increased my effort throughout the race. I managed to find Balance Point athlete Craig Linton to talk strategy just before the gun sounded.

The start was still a bit sketchy with Wave 1 being a little more aggressive than Wave 2 last year, but I managed to avoid the craziness and let a lot of athletes blow by as I settled into a good pace on the opening 10k of fast rail trail. As we started ticking off the miles I slowly worked my way forward through the long string of athletes and I got myself to the front of the main bunch just before the first off-road sector without expending too much energy. I learned from my mistakes last year and kept my effort in check on the first big climb. There were still a few good sized groups up ahead, but there was a LONG way to go to catch them :) 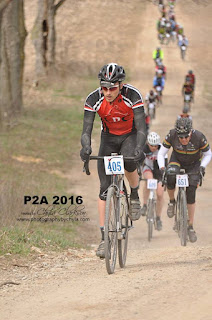 Just before the first road section I saw fellow triathlete Scott Dickie come up beside me. I know he's a very strong rider and he was clearly committed to a big effort to get to the front of the race so it was all aboard the pain train while he started riding through some small groups ahead. I was still trying to be careful not to blow myself up too early so I put in a bit of work but also took advantage of some small energy savings like sliding to the back of our small group on the climbs and making it up on the downhills and corners.

I was already putting in a bigger effort than I had wanted to in the first 20k but I didn't want to lose our small pack that was moving up through the field. From ~12-25k the course is mainly gravel roads with farm laneway sectors every couple k's, which is where I went way too hard last year trying to stick with cross packs. But we were rolling along well and I couldn't believe how quickly the miles were going by and how much more comfortable I was compared to last year on my rigid mountain bike. Scott was pulling much of the road sections and I would take the lead on the dirt and was able to make big gains on groups ahead through the technical stuff.

Around 25k we hit one of the more challenging farm lane sections and Scott misjudged a corner and ended up in the grass. I knew it would be a big hit to our firepower but there was a group of 10-12 guys less than 30 seconds ahead. I wanted to wait for him but I had to commit to catching the group as soon as possible before the next long road section. I managed to bridge up and got things organized to keep rolling through the field. I had the feeling we were getting towards the front of our wave so my strategy was to keep a few strong riders at the front of the group working together on the roads, then get to the front before the trail sections and hit them HARD to see who I was with on the other side.

I was starting to put in some much bigger and longer pulls to keep the pace rich but I still couldn't believe how much better I felt than last year and how quickly I was getting through the course. At the half way point I did some rough math and even knowing the second half is harder I was on pace for a huge improvement from last year's time. When we got to one of the final farm sectors at 45-50k (ie. the point where I completely died last year) there were 3 or 4 of us who were putting in a lot of work, and about 10-15 guys sandbagging along for the ride behind us. Then this thought popped into my head from my race report last year:

"At 50k there was a short trail then a long 10+k flat section of rail trail. In hindsight, this would be the spot to really put the hammer down and set up for a great race."

I decided there weren't going to be any more free rides, and after riding well through the trail I was at the front of the group and put in a surge at the start of the rail trail. We still had 20k to go but it was time to commit to a big effort. When I looked back there were still a few hanging onto the back and one young guy who was able to pull through and help, so we shared the work load up to the left turn at 60k.

From there all that's left is a couple steep gravel climbs, two mud chutes and the crazy climb to the finish. There was no more working together...it was max effort to the finish line. It was also the only part of the course that I was a little nervous about the capabilities of my cross bike vs. the lighter gearing and stronger braking of my mountain bike last year. I thought my hands were going to give out on me going down Powerline Mud Slide from braking so hard down the 500m insanely steep and slick mud, but I cleared it and only had a couple Wave 1 riders left ahead of me. 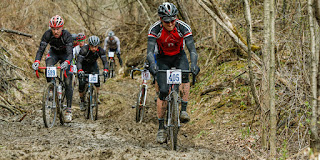 Powerline brings out the most determined of faces

After barely surviving the final climb last year with 30x36 mountain bike gearing I wasn't sure if I was going to make it up on my cross bike with my 36x28. But once the climb started I was worried that if I unclipped I wouldn't even be able to walk up the hill to the finish. I put the bit between my teeth and told myself that every rider I could see ahead was 101st place and I HAD to pass them for top 100!! I almost couldn't believe my Garmin when I hit the finish line in 2:13. I was smashed and I felt that I had executed a good race, but I didn't expect it to be that fast.

I managed to finish in 71st place overall and 8th out of 400+ in Wave 1, almost 30 minutes faster than last year. Similar to Steaming Nostril it's hard to compare my time to the winners (about 9-10 minutes faster) who of course had the advantage - and challenge - of an elite peloton to race with. But I guess I'll find out next year when I line up with the big boys! I was thrilled to achieve my big goal for this race and had WAY more fun than last year...and I guess it gives me motivation to have some solid early season form next year too!

But for now it's time to switch gears and refocus with my final spring race this weekend at the Mississauga 10k where I have another big goal of trying to break 35 minutes. I wasn't sure how things were going to go this spring switching back to short course training but I've already exceeded all my expectations and I can't wait for tri season!
Posted by Ryan Power at 8:32 AM