I spent a lot of time and effort on the lead up to St. Croix, and maybe if this was last season I would be at a complete loss as to where to take things from here. But it only took the first 5 minutes of sitting on the side of the road with my flat to get over the frustration and move on. It's a long season and I have set myself up really well for the upcoming summer.

I have taken a lot away from the race already despite my day being cut about two hours short. First off, I will never race without a spare tire or tire sealant again. I swear by tubulars on my race wheels (I would ride them in training too if I could afford another set of wheels, but I'm already trying to take donations to replace my race wheels after last week!), but since you can't fly with CO2 or sealant I decided it wasn't worth carrying a spare tire on my bike. I won't make that mistake again.

Second, I think I have finally found some serious direction and motivation in the sport: competing at the pro level in long course. Sure I wasn't in the front pack on the bike or making a move on Lance Armstrong, but it was a great experience to line up with those guys and at least feel like I was in the chase with a chance for top-10 at one of the most competitive races out there. I want to continually put myself in the mix and learn from the experiences, rather than shy away from the big races until I deem myself "fit enough".

Finally, I love travelling, but damn it's expensive to try and race abroad...a point that was made even more clear given my DNF. Canada has some awesome races, everything from the local races (that now have prize money!) to some of the most beautiful and historic races out there. I think I'm going to stick to racing a little closer to home for a little while.

And before I leave the race completely behind me, for those who either don't believe me or have a hard time understanding how insane the conditions were on the island - and how polar opposite it was from my last time there, thus what I expected - here's a photo from Terenzo's blog, about 12 hours before the race (and it rained more overnight): 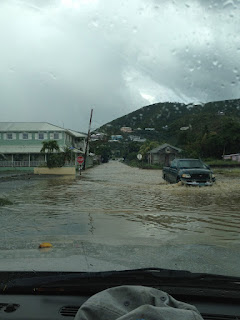 So what's next from here? Well first off I've been working on clearing up a cold that I actually first developed the day before the race, and did my best not to think about until afterwards. Last week was a big recovery week, and this week I will be back on the start line with another O-Cup road race with the Coach Chris team. I'm also excited to be working with James Loaring and LPC again after a winter of doing my own thing, learning how to balance full-time work with elite level training.

I made a couple minor changes to my race plan for the season, but the main goal is still a couple half ironman events, and going after points in the MSC Triathlon series. So my official start to the tri season will be MSC Woodstock in two weeks, and the next big event on the horizon is the notorious (for me) Welland Half. I'm looking forward to chasing points and prize money throughout the year at some of my favourite races out there, and I will cap off the year with a race I have toyed with doing since it started out...the Muskoka 70.3.

Next update will probably be after this weekend, thanks for reading!
﻿
Posted by Ryan Power at 7:02 PM