An Exercise in Suffering: P2A 70k

It's hard to believe that it's only April and my racing season is about half over already! Not in terms of the length of my season of course with Louisville still almost six months away. But with it being my first go at the full distance, the plan for this year is to bank some early races and get essentially a full "season" of racing done by early July, then take a mini mid-summer break and dedicate the rest of the year to getting the big training miles in with as few interruptions as possible.
So this weekend was part 2 of what I consider to be the "Spring Classics" for Ontario endurance athletes, having already had a very successful part 1 at Around the Bay. Like ATB, Paris to Ancaster has been on my bucket list of local races for a few years now but between scheduling conflicts and equipment requirements it has never really fit in.

For those who aren't familiar Paris to Ancaster is a 70k cycling race with a bit of everything…pavement, gravel, trails, farmer's fields…everything. Despite the late spring in Ontario the trails are actually quite dry so the race was in ideal conditions. I've heard of people racing on everything from dual suspension to road bikes…I figured my 18lb carbon mountain bike with rigid fork and cross tires was a good option. 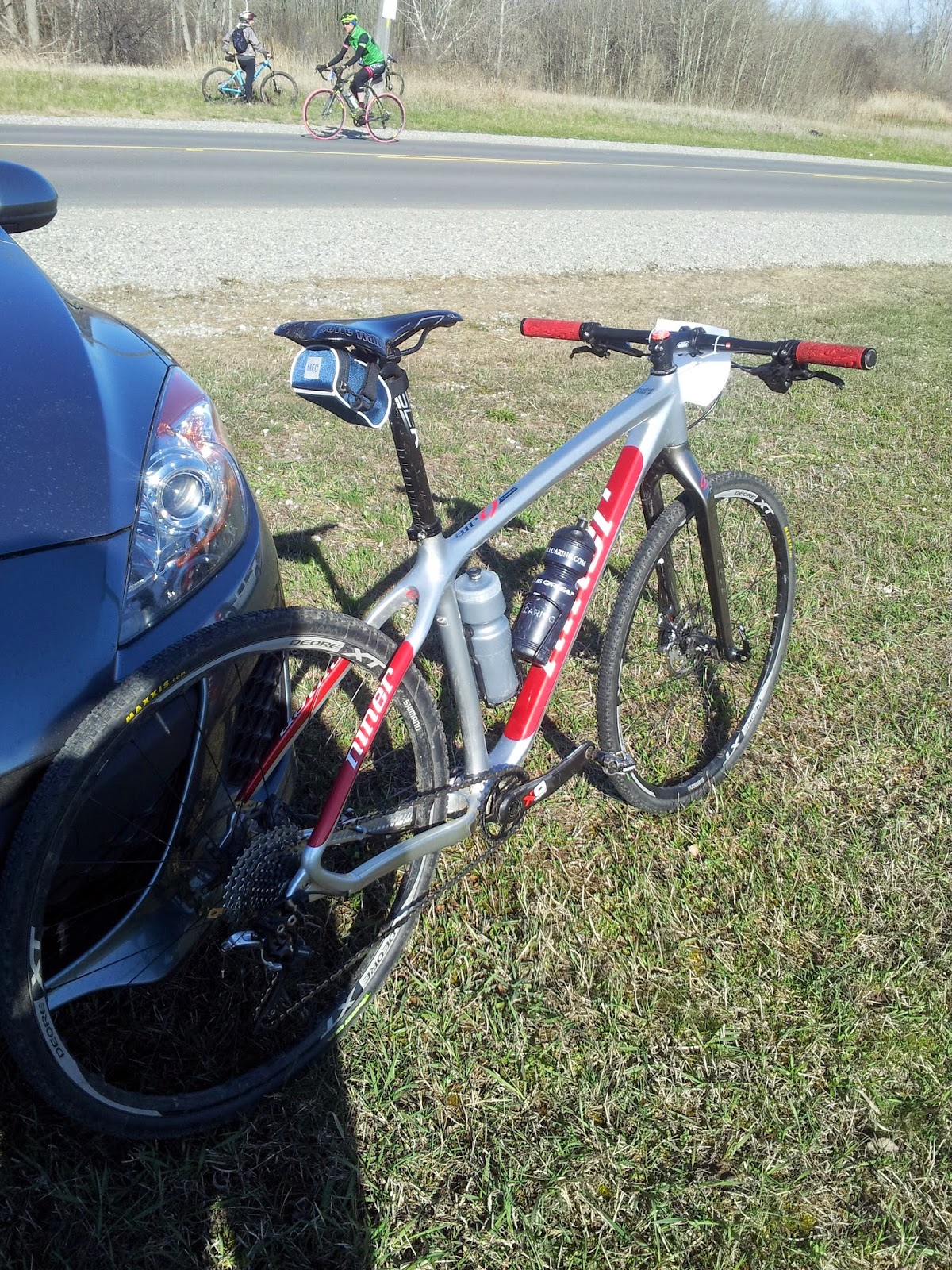 I started in wave 3 of 5 and my only goal was to push myself as hard as I could and try to survive this epic event. From the gun the leaders took it out very fast, and thinking along the lines of a road race I didn't want to lose contact with the front group off the start. BIG MISTAKE. This race is so long with so much varying terrain there is virtually no purpose in trying to find a group to work with until at least 30-40k in when everything starts sorting out. Had I known the course my tactics and gear choices would have been VERY different, but they never actually release course maps since parts of the race are on private property. So I learned P2A the hard way :)
The opening 10k was on fast rail trail along the Grand River. I tucked in behind some fast leaders but as soon as we hit the first loose rocky climb everything splintered. I felt right at home with my mountain bike…for about 5 minutes. From everything I've heard about this race I was surprised how much of it was on roads. Besides a handful of sections through farmer's fields and one or two short trail sections, it was basically a road race.
After dropping most of our large group in the first two off-road sections where I rode really well, 20-50k was almost entirely on pavement or gravel roads.  As strong and confident as I was on the dirt, I felt completely useless on the roads. My poor little XC setup is an off-road dream machine but it only has gearing up to about 40-45km/h. So without fully recognizing it I was completely burning myself out – I'd get on the road and try to latch onto packs of cross riders until I ran out of gears and got dropped. Then wait for some off-road and blow past all of them again, then repeat it all over when we hit the road again. I knew I was riding pretty hard, but didn't realize the toll it was taking on me with so many spikes in effort.
At 50k there was a short trail then a long 10+k flat section of rail trail. In hindsight, this would be the spot to really put the hammer down and set up for a great race. But after riding through a large pack who were all walking the trail, I got on the rail trail and I was done. I don’t mean I was starting to feel the fatigue. My quads and lower back were cramping on every pedal stroke and I was looking for a suitable place to pull over and lie down. My thought process degraded along these lines:
"Ironman is going to hurt too, try to stay focused"
"You paced like a dumbass"
"I hate bikes…I hate trails…I hate nature"
"I'm quitting racing and never getting out of bed again"
Sometimes as an endurance athlete you take for granted just how long a given distance can be...but 10km never felt so long! I really wasn't sure how I was going to get to the finish but at 60k I was forced to come to a stop at an intersection while police waved some cars through. A few riders around me were cursing and yelling at the situation, while my only thought was "thank f**k, I can stop for a minute!" It gave me just enough time to stretch out my back and refocus. I told myself that no matter how much it hurt, I was going to suck it up and finish the last 10k strong.
After taking some jube jubes from a spectator I successfully navigated the infamous Powerline Mud Slide (about 500m of steep downhill with mud up to my rotors) around dozens of people crashing and walking, and all that was left was the final climb…the steepest and longest of the day of course. If I was at all coherent I would have laughed out loud at the number of people literally falling off their bikes from cramping. But with help from the spectator support I dragged my butt up the climb and finished.
It took me a while to find anything positive to take away from Paris to Ancaster. My wreckless pacing and poor equipment choice made for one of the hardest and most miserable experiences I've ever had riding a bike. But no matter how a race goes, it is always an opportunity to learn and improve for the next one. Now that I've experienced this race, I won’t return unless I have a cyclocross bike…maybe even a road bike with 28-30mm tires. And I'll know the course better and pace accordingly. I was really surprised how well I rode the rough stuff, not falling or having to unclip once. I felt like I was floating over it while everyone around me was walking or crashing. And did I ever learn how to suffer!
Fortunately it was only meant to be a hard training ride, so all things considered I got more than I could have asked for out of it. So I'll be thankful that I learned some hard lessons in my lowest priority race of the season, and since I don't even want to look at my mountain bike until further notice it’s a good time to get down to some serious work for my first half of the year at Multisport Canada's Welland Half.
Posted by Ryan Power at 8:29 AM