This past weekend was Ontario Club Championships at the Guelph Lake Tri Weekend. Despite it being practically a home-town race and one of the biggest events in Canada, somehow I had never done the Olympic-distance race at Guelph Lake. I've done the sprint many times, including one of my best results last year, but the one time I raced the Olympic in 2010 I pulled out on the run with an injury. Its a good honest course and always brings lots of strong competition, so I was looking forward to getting the monkey off my back, putting in a big effort and doing my part to help Team LPC with some championship points.

Coming off a solid race last weekend including a PB bike split I had some confidence that my fitness is going in the right direction but I was still a bit nervous not knowing what to expect from the course and a deep field. But there was an awesome contingent of LPCers at the race, with lots competing and plenty more coming out to support. Weather was perfect, warm-up was good and I lined up together with four other LPCers.

Swim: 24:03
My focus for the race was to be patient and build throughout each segment, and try not to get overly excited off the start with the strong competition. I had nice clean water off the start and slotted behind Mark and Chris knowing they would likely swim around 21 minutes. I held on to them for a while, then started to go backwards from 500m to the far turn on the course until I finally found find a bit of a rhythm on the way back into shore and brought back a bit of time and distance on the small group (pretty much all LPCers) ahead of me.

I was really looking forward to getting on the bike and seeing if I could ride myself to the front of the race, unfortunately my legs had other plans. When I got out of the water my hamstring cramped badly and would not let up as I ran, then hobbled, then walked up the long hill to transition. So I did the only thing I could, I sat on my bum and watched a stream of athletes run past while I took my wetsuit off and tried to stretch it out. Fellow LPCer Garrick Loewen aka my little brother (who won the sprint event!) ran down to see if I was ok, likely thinking that I had been bitten by a shark. 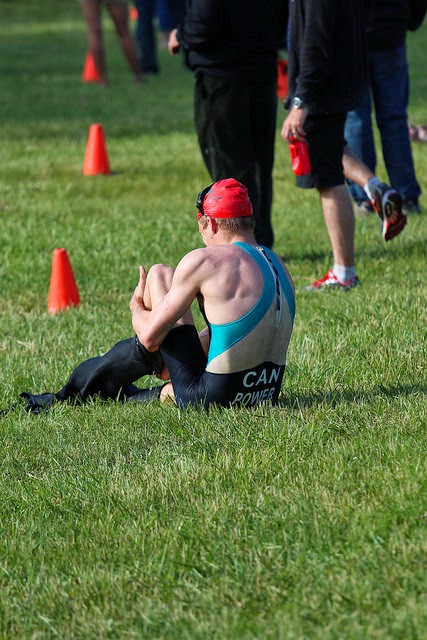 Eventually it loosened up enough for me to stand up and slowly make my way up to T1 and get on with my race. The good news was that I later found out, not counting my little picnic stop, my 1500m swim time would have been right around 22-flat, which is a solid swim for me and my best of the season so far.

Bike: 1:02:15
It would have been really easy for my to give up at that point with the race well up the road and not being sure how my legs would hold up on the bike. And Ryan from a few years ago probably would have. But I put it out of my mind and changed my focus to putting down a good bike split and going from there. After all it was Club Championships and I wanted to contribute some points to LPC. 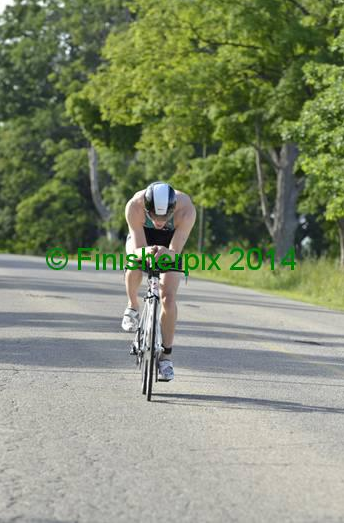 Luckily I felt ok getting on my bike and settled into a good rhythm. My plan was to focus on not burying myself on the early hills and really work the flatter middle 30k of the course. My power wasn't as good as in Welland last weekend with my hamstring a little twitchy but I was still making progress and picking off athletes. I managed to move up quite a bit with a relatively good bike split, not my full potential but some reassurance that my bike fitness is continuing to improve with my big races still many weeks out.

Run: 38:23
I had the run in the back of my mind through the whole bike wondering if my legs were going to cooperate with me. But I settled into a good rhythm right away. I really wanted to take down my Olympic-distance run PB which would mean aiming for sub-37. I really liked the run course with a mix of terrain and surfaces that seemed to make it go by faster. 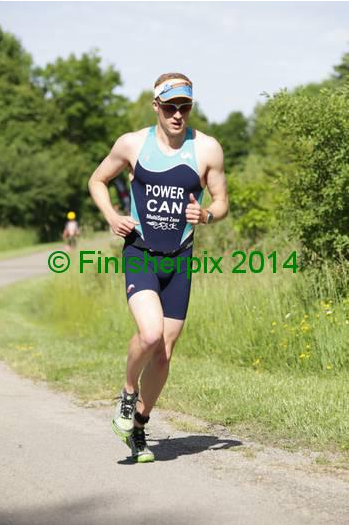 I was right on pace through the first 5k (18:22) and it felt manageable to hold. I had made my way into the top-5 on the road and I could just barely see Coach Mark up ahead around 7-8k. I decided to take a bit of a risk and pick it up knowing that I'd have to put in about 15sec per km to catch him. And then everything cramped up again. My last km was at Ironman shuffle pace just trying to hold it together without getting re-passed with my quads, hamstring and diaphragm cramping up. I was a little too optimistic with my pacing, but I'm not going to take down any PBs without taking a risk now and then. I ended up in 6th with Mike Hay just nipping me in a later wave.

So it may not have been the smoothest race I've ever had, but I met my goals of a strong Olympic-distance race/effort and helping out the team with some points. And I can't finish this without sending special congrats to Jack Laundry and Garrick for picking up the overall wins this weekend. LPC ended up going 1,3,4,5,6 for the men and 2nd for women in the Olympic, and had equal domination in the sprint. I haven't yet heard if we've officially won the club championship based on participation and age group placing, but there was no question that LPC is the dominant club in Ontario these days and its a lot of fun to be a part of it.

Obviously the biggest question I had coming out of the race was where those cramps came from, and how I can avoid that happening again. I'm confident that it wasn't nutrition related, but I've identified a few potential causes that I'm addressing moving forward with my training and prep leading into my higher priority races. All things considered it was another successful race in my season-long prep for 70.3 Worlds. My fitness is good and still going in the right direction, and I've got plenty of time to work out the kinks. For now I'm back to some more hard training with a few weeks before my next race.
Posted by Ryan Power at 12:05 PM